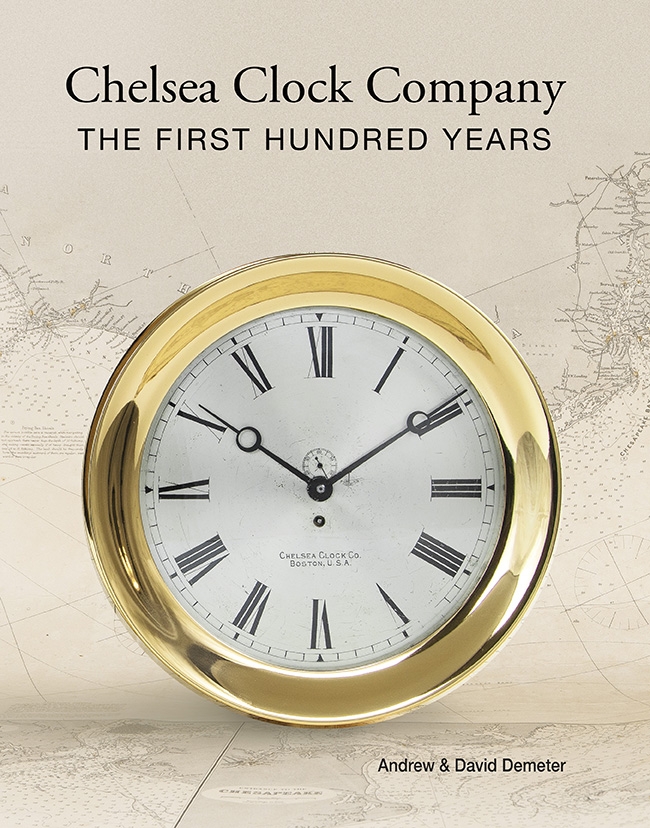 The second edition of Andrew & David Demeter's wildly popular  "Chelsea Clock Company, The First Hundred Years" is now available.  Long out of print and selling on the secondary market for multiples of the original selling price, this new updated second edition is a must have for fans of the Chelsea Clock Company.  Expanded to 360 pages from the original 275 pages, new and unpublished information and photos from the best Chelsea collections in America make this book the new standard on Chelsea history.

The second edition has been updated and expanded to include:

Opportunities often knock just once in a lifetime.  The planets have lined up for Andrew and David Demeter as their masterwork, Chelsea Clock Company, The First Hundred Years , is now available to collectors of the last great American clock.  100 years of unturned historical soil in the form of factory records, original catalogs, access to long time employees, and an exceptionally intuitive ability to piece this puzzle together, have resulted in the Demeters producing a volume of unequaled scope and depth.

When Andy and David began their research on Chelsea Clock Company over 10 years ago, the history of Chelsea and the man most responsible for the high standards of these wonderful clocks, Joseph Henry Eastman, was a confused blur at best.  Piecing together Eastman's life and the companies that preceded Chelsea Clock Company is a well presented and fascinating perspective on the growth of American industry at the turn of the 20th century that finally sets the record straight on the birth of this unique company.  The complete Chelsea history, as none other, was able to be chronicled in detail by the Demeters.

Reaching back over 50 years, interviewing living people who managed the company and produced the clocks, opened the door for perhaps the biggest discovery of this project, the Joseph V. D'Avella thesis, written in 1953.  The D'Avella thesis filled the gap between the beginning of Chelsea in 1897, up to those eye witnesses still living.  Mr. D'Avella was employed at Chelsea while attending Boston College Graduate School of Business and working on his master's thesis, "Managerial Economics of the Chelsea Clock Company".  The detail in Mr. D'Avella's thesis and the Demeter's blending of it with their in-depth research makes for a fascinating perspective, soon to be lost, if not for their efforts.

No other clock company has such a rich horological and maritime history as does the Chelsea Clock Company.  It is perhaps this maritime link and collector interest in all things nautical that has pushed the Chelsea clock to the pinnacle of the maritime clock world.  Why other American clock companies have ceased operation and Chelsea continues may be attributed to this maritime link and the quality of their product.  The model identification guide, encompassing over 100 pages of the book, demonstrates Chelsea's understanding that long term success requires a well rounded product line.  In spite of the 100s of Chelsea models, non marine, that have come and gone over 100 years, the common thread that has survived has been their famous marine clock, originally designed by Joseph Eastman in 1880.  For collectors, the Demeters have provided perhaps their most valuable gift, the gift of organized knowledge of the Chelsea clock.  Knowing when and how many of a certain clock were made is a fascination that intrigues all collectors.  The chapters on model identification, commercial catalogs and serial numbers have in-depth knowledge and insight into areas that astute collectors will find invaluable.  The best horological books that I have read have been books that speak to the history and fascination of the clock.

Some may find fault with this book for not delving into that perhaps most often asked question of antique clocks, "What's it worth?"  To those, I say, and I think the Demeters wisely recognized, that education is worth more than all the gold in California.  A good Chelsea clock bought yesterday for a fair price, will be worth more today and even more tomorrow.  When the prices of yesterday are long forgotten, the history the Demeters have chronicled will be a sought after commodity.  This book is a must have for students of the American clock.